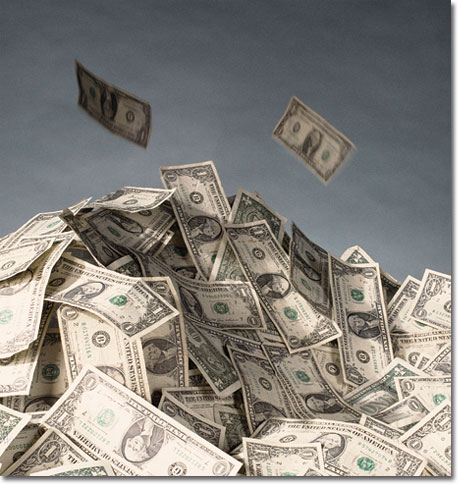 In order to prevent the economy from plunging into a looming recession, each individual or family will have to redistribute their stimulus checks back into the system.

This notion undermines most economic principles that have been instilled in us from the beginning--save, save, save.

"Putting the money in the bank will not stimulate the economy," said Bruce Henrikson, department chair of Business and Agriculture Industries at Parkland Community College in Champaign.

While some may buy retail purchases, others may put the extra income into a savings account or pay off debts, possibly counteracting the purpose of the package.

A national Los Angeles Times/Bloomberg poll found that 18 percent of respondents planned to spend the money, 34 percent said they plan to save the money and 31 percent plan to use it to pay existing debts.

Henrikson said the package will not stimulate the economy but may diffuse any further economic downturn.

"(The stimulus check) won't even cover my increase in fuel this year," Henrikson said.

Any benefits the stimulus package would have had on the economy will be nullified by the increased prices on fuel, food and transportation that individuals have to endure, he said.

J. Fred Giertz, a professor of economics within the University of Illinois' Institute of Government and Public Affairs, said the study isn't very useful because it doesn't take into consideration that a person might use the money to pay off debt, which would free up other money to be used to spend.

"It might be enough to stop us from going into a recession," he said.

The important distinction resting upon the package's success is whether the rebate is spent or saved, Giertz said.

A second-level consideration is whether the rebate is spent on domestic or imported goods and services. Spending money on locally made goods will have more impact.

"There is a lot of discussion about whether these stimulus packages work or not," he said.

Geoffrey Hewings, a professor of geography, economics and regional planning at the University of Illinois at Urbana-Champaign and director of the Regional Economics Applications Laboratory, said he doesn't think a package of this size will stimulate the economy.

Hewings said analysis of previous economic stimulus packages show they didn't make a drastic improvement in the economy as intended.

"The counter-balance here is to give people a one-time shot rather than drip it out to them over a long period," he said.

With unemployment on the rise Hewings believes consumers will save the money to use it to pay off existing debt.

"The stimulus effects of that are not going to be very dramatic," Hewings said. "I think we're in a very, very difficult and uncertain time."

Because the package was passed quickly its likelihood of success is better than previous attempts, Giertz said.

In the past, these packages have taken too long to pass and the recession has come and gone before people receive their checks, he said.

Giertz said there is a high probability of a recession occurring.

He said there must be two consecutive quarters of economic decline, or a declining gross product, in order to determine that the United States is in a true recession.

Hewings said he thinks the decline in the housing sector, at least in Illinois, is starting to slow, but he said there may be more problems to come in the financial sector.

"I think there is a lot of sentiment that some of these financial institutions haven't completely unraveled," he said.

- Greta Weiderman is editor of Central Illinois Business Magazine. She can be reached at (217) 351-5695 or gweiderman@news-gazette.com.