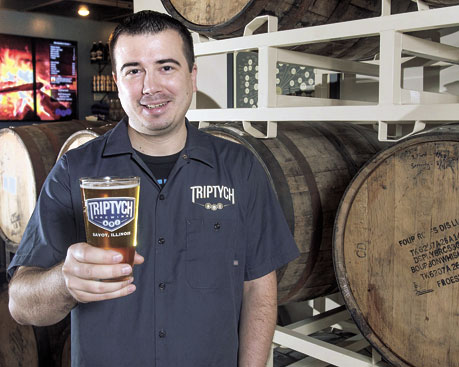 Triptych Brewing began brewing in December 2012 and opened for business at 1703 Woodfield Drive, Savoy, in February 2013.

Since then, the company has made about 75 different beers, with 150 batches brewed to date, according to majority partner Anthony Benjamin.

The brewery's "Dirty Hippy" variety won the silver medal in the English brown ale category of the 2014 World Beer Cup.

About 80 percent of Triptych's product is sold in its tap room -- most of it in growlers and cans "to go."

Triptych is the only licensed microbrewery in the county, Benjamin said.

The company was founded by Benjamin, Joshi Fullop and Jason Bartell. Last year, Fullop and Bartell sold their stakes in the business, Benjamin became majority owner, and Lyle Amacher and Greg Altstetter became his new partners. The business has four employees.

Plus, the cans Triptych uses are made of 40 percent recycled aluminium.

Some beers are brewed seasonally. For Valentine's Day, Triptych is brewing a chocolate cherry stout.

Brewing takes place three times a week, almost always on Mondays and on two other days depending on various factors.