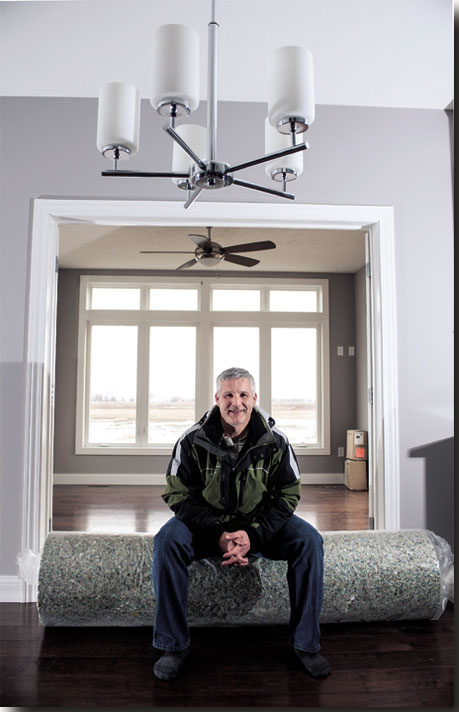 This winter's snow and frigid temperatures may have slowed down plans some residents have for building new homes.

But area homebuilders are optimistic about what the year will bring for new home construction.

"I think it's going to be better than last year for sure. I'm seeing all indications that it will be," said Mike Martin, director of residential development for The Atkins Group.

"Interest rates are still low. People are still looking," he said. "I think there are some thoughts that rates could rise, and people are making their decisions."

The Atkins Group's subdivisions of Ashland Park and Stone Creek already had more interest in early spring than in the last couple of years, Martin said. "It's exciting."

The developer had plans in early March to start 20 homes at Ashland Park and six at Stone Creek, and it had also sold several lots at Stone Creek to other builders.

The winter weather did put a damper on the beginning of the season, though, said Steve Meid, managing partner for Signature Homes.

He said his company saw a downturn in activity of about 25 percent in the late winter compared with most years. He attributes that to the cold.

"It was not easy to get out and look at houses," he said.

He is still optimistic about this year's homebuilding season, though. In early March, Signature Homes had 13 homes sold for the year, many of them being finished up and several just starting.

"My last two years have been great, comparable to our peak years in terms of numbers," Meid said. "I still think this year will turn out fine if we can get through the weather. If someone wants to build and they are just procrastinating because of the weather, they'll still come in. We could get flooded."

McGuire Custom Homes has had an increase in clients wanting to build, but the weather has delayed the start of some of those homes, said Nicole McGuire Thompson, president of McGuire Custom Homes. Her company is building homes for clients at Thornewood in Mahomet, Liberty on the Lake in Champaign and Savoy, Prairie Meadows in Savoy, and Stone Creek in Urbana.

Statistics from the U.S. Census Bureau and U.S. Department of Housing and Urban Development showed housing starts nationwide were down 2 percent in January compared with January 2013. The National Association of Home Builders reported housing starts for the Midwest region down in January by 47 percent. But the association reported in early March that several markets in the nation had returned to normal levels of activity or higher, and others were starting to rebound.

One factor contributing to Meid's optimism about this spring: the Home Builders Association of East Central Illinois will hold a Showcase of Homes in the Prairie Meadows subdivision in June. It will be the association's first showcase in five years, and seven builders are constructing homes for the showcase.

Meid said the poor economy kept some builders from working on spec homes in the last several years. But now, he said, there is a shortage of new home construction compared with demand.

"I think (builders) feel a little more confident they can build a spec home," he said. "It's good advertising, and they can sell homes off those.

"Without having a spec home, it's hard to sell homes. You've got to show them what you can do."

Meid said his company has continued to build spec homes in the subdivisions it develops, which include Thornewood, Prairie Meadows, and Ironwood, Trails Edge and Will's Trace in southwest Champaign.

A trend Meid and Martin are seeing is interest in somewhat smaller homes.

"I think people have backed off of trying to buy square footage, and they are trying to make sure the house they do build is nicely appointed, has all the bells and whistles they want and aesthetically looks nice," he said.

Meid agreed: "People are definitely keeping homes under $400,000 if they can."

He said that means demand for houses in the 2,200- to 2,400-square-foot range. The trend, Meid said, is for "a little smaller house with really nice finishes on the inside."

No matter what the price point, he said, customers want granite or quartz tops on all surfaces, such as bathroom and kitchen countertops; hardwood floors; tile; and "a more modern feel to homes."

Thompson, who is chairman of the board of the Home Builders Association of East Central Illinois, said building trends this year include smarter, less costly automated home controls that can be operated through an iPhone or iPad.

"With the open floor plan concept still a priority for most of our clients, I have implemented more mindful design to minimize home clutter," Thompson said. "Kitchens act as the center hub of the home's activities in both daily living and entertainment. This has led us to integrate a small room just off the kitchen to function as the 'home management hub.' Our homes this year have larger drop zones than we have built in the past that include the typical boot bench for easy shoe, coat and bag storage. We are also including desks for dropping mail and to keep the items that are brought into the home on a daily basis from landing and cluttering the kitchen."

He said the plans emphasize "easy living" by putting master suites on the first floor, by including plans for ranch homes and by providing valet areas for keeping track of keys and charging phones.