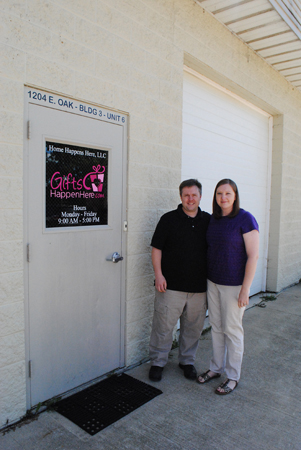 There are so many incredible businesses in the Central Illinois area, that Central Illinois Business staff was not completely surprised when we was realized that the successful online store "Gifts Happen Here" was located locally, creating jobs and bringing in revenue right here in Central Illinois.

Still, it was a great discovery.

Entrepreneurs and business owners know the struggle to make it in a competitive marketplace is real. The United States Bureau of Labor Statistics found, in a study from 2013, that 24 percent of businesses failed in the first year, and 48 percent didn't even make it past the second year. So, when a local business thrives, this is something quite remarkable.

Gifts Happen Here has been in existence since December, 2011, and they are certainly thriving. When CIB caught up with GHH owners, Jill and Ben Winter, they had just completed a move from west Champaign to right off of route 150 in Mahomet to give them more space. The company needed it because of their success and their company is growing. They have also hired new staff, have new equipment, and have an expanded product line.

Even though the actual company has been in existence for around four years, the company idea has been an evolution of many years of work by entrepreneur, Jill Winter. Jill started selling product on EBAY-successfully- in high school. She went on to achieve an associate degree from Parkland Community College and a bachelor degree in marketing and business administration from the University of Illinois. All the while, Jill sold product online. She started to figure out, through her experience, the best strategies to selling product online.

As most entrepreneurs do, she tried some things that worked and then, some that did not. But, she didn't give up. She studied the marketplace, trends in business and tried new strategies. That seems to be the tell-tale sign of an entrepreneur: they don't give up.

Both Jill and Ben had successful careers working for others before the creation of GHH. And still, Jill kept selling online and successfully making money. She sold home décor, candles and other items, but branched out to tote bags.

Jill said he is extremely organized and prepared.

Then, one day Jill realized she was making more money at selling product online than she was from her nine-to-five job working for somebody else.

"So, I left and started doing this," she said.

Likewise, Ben, who had been a successful computer network administrator for Unit #4 and the State of Illinois, decided to leave and partner-up with his life partner. This was not because he was lacking success in his career, either. He had completed a multi-million-dollar project for the state right before he made the move to GHH.

And Jill wanted to expand into personalized bags and other items for sale, so brining Ben on was the right move for the company.

"Ben wrote the software," Jill said of the programming that he created that enabled the company to move towards personalized items. "Before Ben came on, we were selling bags without the embroidery."

Ben said that Jill has reinvented her selling strategies many times, and will probably continue to evolve as the marketplace changes. Ben said they now have that expanded product line. They offer literally hundreds of products, and with the combination of personalization, the possibilities are virtually endless. Besides tote bags, diaper bags, utility bags and backpacks, there is: jewelry, home décor, flags, towels, scarves, clothing, footwear, frames, garden stones, and the list goes on and on. They also have "quick gifts" that can ship as early as the same day. Plus, they have sale items as low as $3.95.

The expanded choices available to customers within the expanded product line was quite an undertaking, too.

"I wanted to run many more fonts," Ben said. "Shania tested and ran over 200 fonts."

Shania Wright is one of the embroiderers and designers at GHH. She personally ran the fonts on one of the two intricate $15, 000 Brother Entrepreneur Pro e-1000 10-Needle Home Embroidery Machines to see how they would look for their customers. Wright, who is also a local freelance artist and photographer, said the process was worth it, because of the quality their company has to offer their clients now far exceeds the competition.

The day CIB visited GHH, the tone of the manufacturing center was busy, but friendly. The facility was clean and well-organized. It was obvious by the banter exchanged between management and staff that there is a real team effort going on at the facility.

"They really know their stuff," Embroiderer and designer, Briana Bailey said. "Jill is smart and has a handle on everything in the business. I don't know how she does it. Ben is an amazing programmer and is a great guy to work for. It's nice they're successful, because they're really good people."

JOAN HERE IT IS: And as a special offer for Central Illinois Business magazine readers, GHH has free shipping for all orders placed before September 30, 2016. Use the code: CIBFreeShip upon checkout.

This business has hit the ground running and has been a whirlwind for the Winters who met online, were married, and blended two families the preceding summer of the business' birth in 2011. They are encouraged about their business future, too.

Go to Gifts Happen Here's website at: giftshappenhere.com -and don't forget the coupon code: CIBFreeShip- or if you would like you may contact them at 217-778-4219 or email them at info@giftshappenhere.