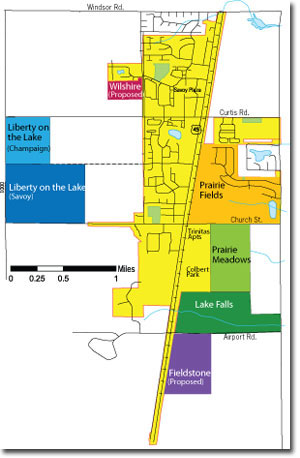 Land that has fostered corn and soybeans for the past 100 years will go untilled this year as dirt is carved for new subdivisions in Savoy.

More than 600 acres of agricultural real estate are part of Savoy's continued growth that includes five separate subdivisions, new commercial property and an apartment complex that are all in the works.

Savoy has grown by leaps and bounds in the past 15 years, and it may grow even more in the next 15 years. Savoy's successful Prairie Fields subdivision, started in 1995, proved that the village had a home buyer's market.

"We've definitely slowed and the market is over speculated," said Steve Meid, project manager for Signature Homes. "A couple years ago everything was moving at a rigorous pace."

Meid said the trend is not frightening, but is somewhat beneficial to experienced home builders because the declining market weeds out weaker developers in a crowded industry.

"We are a little more recession proof since we are adjacent to the University," said Dan Davies, Savoy's zoning administrator. "Other places like Carle and Provena keep the job market strong for the community. The developers aren't scared; they're still coming down here."

Three subdivisions are in their early stages of development and two others have received preliminary plat approval from Savoy's government. Additionally, a 278-unit apartment complex is under construction next to Savoy's planned Colbert Park.

"A good portion of the community is tied to the housing market one way or another," Meid said.

No strangers to developing real estate in Savoy, the Peifer family and their development company, Signature Homes, are responsible for the 220-acre subdivision, Prairie Fields. They have begun work on their next two developments in Savoy.

Prairie Meadows crosses Church Street to the south as an extension of Prairie Fields. Prairie Meadows is 103 acres consisting of 336 single-family homes.

"We've been successful with Prairie Fields and bought the land for Prairie Meadows as an extension of that tradition," Meid said.

To the south of Prairie Meadows is Lake Falls, also developed by the Peifers and Signature Homes. Lake Falls is Savoy's first foray into upscale homes with prices estimated to range between $250,000 and $750,000. This subdivision, which will run laterally along Airport Road between Route 45 and First Street, will feature larger lots and unique landscaping to evoke the namesake. Lake Falls has 454 single-family homes, 24 duplexes, 140 condominiums and nine quadplex units planned for its 180-acre expanse.

Meid said the traditional location for higher-priced homes has been on Champaign's southwest side.

The first phase of both subdivisions is underway with 74 homes being built in Prairie Meadows and 48 being built in Lake Falls. Meid said a home typically takes four months to build from the ground up, and he envisions these phases to be completed within two years.

Davies said Lake Falls will act as the site of Champaign County's Showcase of Homes this July. This event is free to the public and features some of the latest innovations in homebuilding.

To the west is another subdivision with work underway. Liberty on the Lake is a 240-acre development that falls on the Savoy/Champaign boundary. Located north of Church Street and east of Mattis Avenue, Savoy's gets a larger chunk of the 240-acre development with 160 acres in the village limits. Select Development of Minnesota is developing the subdivision and Coldwell Banker Devonshire Reality is marketing it. It has 336 single-family homes and 39 duplex lots planned.

In addition to the three subdivisions underway, two more are in the preliminary stages. Fieldstone's 160-acre subdivision will continue the southward expansion beyond Airport Road east of Route 45. This subdivision's preliminary plat shows 199 single-family homes, 21 duplexes and about 280 apartment units. The Wilshire subdivision is planned for a 40-acre plot of land north of Curtis Road and west of Prospect Avenue on Savoy's northwest side.

"Generally developers find that Savoy is a cooperative partner to work with," Savoy Village Manager Dick Helton said. "We've got a good reputation. We like to see well-managed developments."

Savoy's greatest enticement is a low property tax rate that both homebuilders and village officials cite as a leading cause for the village's growth. Savoy's property tax rate declined from .7108 in 1996 to .6062 in 2004.

Although the village has maintained one of the lowest property tax rates in Champaign County and a sizable increase in sales tax revenue, public services are beginning to feel the burden of continued growth.

"A few roads in particular are showing some real stress," Helton said. "We're trying to address these issues without stressing the village's finances."

The village's plans emphasize services like parks and recreation to keep people interested in living in Savoy.

"We expanded our park's space from 14 acres to more than 80 acres in a couple years," Helton said.

Working with neighboring governments has also proved essential for future growth in the Savoy area. A multi-million dollar, inter-governmental sewer project between Savoy, Champaign and the sanitary district allowed for these new subdivisions to move forward.

"The village was running at capacity for sanitary service," Helton said. "We were at the point that we didn't have any additional space for the new subdivisions."

Aside from the residential development that has swamped Savoy, commercial developers are seizing on the opportunity to provide services to the growing community. Schnuck's is under construction, and a September opening is planned, making it the second grocery store in town, next to Super Wal-Mart. Applebee's, Marble Slab Creamery and Buffalo Wild Wings recently set up shop in Savoy Plaza, and a Chinese restaurant and Korean Karaoke bar plan to open their doors later this year.

Although some national analysts are forecasting the housing bubble to burst more than it already has, Savoy remains optimistic and open to expansion. Helton sees the village growing in size by as much as 5,000 people within five to 10 years. Meid of Signature Homes stays true to business practices and avoids over speculating these new subdivisions.

"It's hard to predict the future and pace of these developments," Meid said. "But a safe bet would be completion of both subdivisions in 10 to 15 years."