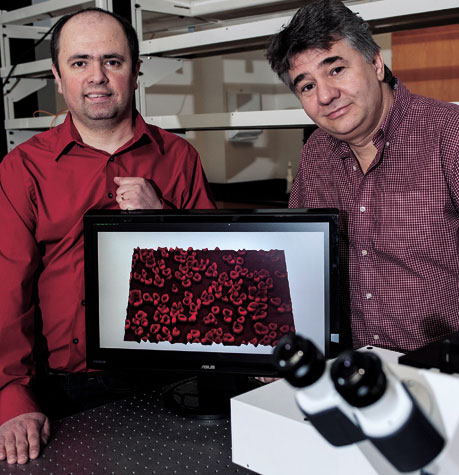 Biological researchers can get faster, more sensitive images of live cells and tissues thanks to a company building on technology developed at the University of Illinois.

Phi Optics launched a system that helps scientists using optical microscopes to get highly accurate images fast. The system, CellVista Q1000, is targeted at life sciences researchers in academia and the biopharmaceutical industry.

A big advantage for researchers is they can get images of cells without killing them in the process, said Gabriel Popescu, an associate professor of electrical and computer engineering at the UI and the company's CEO. Otherwise, researchers would have to use dyes or fluorescence to get the contrast needed for viewing cells.

But using the CellVista Q1000, researchers can watch cells continuously over long periods and get a better feel for how cancer cells multiply and grow.

Phi Optics delivered a system to ETH Zurich, a university in Switzerland.

Founded in 2009, Phi Optics opened an office in EnterpriseWorks, the UI's business incubator, in 2012.

Popescu was born in Romania and came to the United States in 1997 to do doctoral work at the Center for Research and Education in Optics and Lasers at the University of Central Florida.

He got his doctorate in 2002 and did postdoctoral work in spectroscopy at the Massachusetts Institute of Technology before joining the UI faculty in 2007.

Phi Optics' chief operating officer, Catalin Chiritescu, is also from Romania. He received a master's degree in mechanical engineering at the University of Rochester in 2000 and a doctoral degree in materials science from the UI in 2010.

Popescu said he decided to start the company after the UI's Office of Technology Management processed a dozen patents for his lab, and it became clear that a commercial version of the technology could help researchers make discoveries.

The technology used in the CellVista Q1000 system is "quantitative phase imaging," in which two different beams of light are used, and the phase difference between the beams is quantified.

Phi Optics got a $150,000 Small Business Innovation Research Phase 1 grant from the National Science Foundation to build a commercial prototype in 2013.

In June of that year, the company got $250,000 in seed funding from a group led by Champaign-based Serra Ventures, with participation by IllinoisVentures and Newport Holdings.

The CellVista Q1000 system was unveiled at the BiOS 2014 biomedical optics conference in San Francisco.

Popescu said the technology has applications not only in the life sciences, but also in clinical diagnosis and materials testing.

The technology can also be used to detect nanoscale defects in semiconductor wafers, he added.