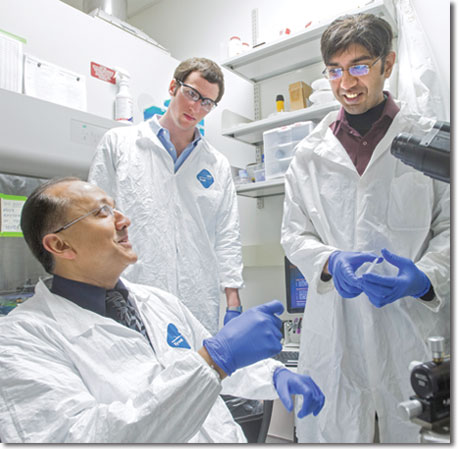 Much like the blood sugar test that allows diabetics to quickly and easily monitor glucose levels, a new handheld device developed at the University of Illinois aims to quickly and accurately diagnose HIV, the virus that causes AIDS.

It's called a "microfluidic biochip," and it's smaller than your palm, about the size of a credit card. What it can do is count a specific type of white blood cells that the HIV virus works to destroy.

When people are tested for HIV, the process typically involves blood being drawn and then analyzed using special equipment called "flow cytometers." Results can come back in a day or two, and the cost is about $50 to $80 per test.

The microfluidic biochip test requires fewer people to be involved. And it costs a lot less -- about $10 a test, estimated UI graduate student Umer Hassan.

"We are all excited about this technology and the kind of impact it will have, especially in low-resource settings," he said.

In parts of sub-Saharan Africa, where there are about 22 million people living with HIV/AIDS, or rural parts of the U.S., patients can live hours from a health clinic, said UI Professor Rashid Bashir, director of the Micro and Nanotechnology Laboratory. Bashir's research group developed the chip.

Because of the drugs available now, HIV has become more of a chronic disease; however, there still are challenges associated with how to easily test patients, especially in places like Africa, Bashir said.

Bashir developed an earlier version of the HIV diagnostic biochip technology, which is expected to be available commercially next year. The new, or second-generation, technology not only counts a specific kind of white blood cells, called CD4 cells, but also CD8 cells (which increase while HIV destroys CD4 cells) and determines the ratio between the two, Hassan said. That ratio can provide information on the strength of a person's immune system, he said.

Imagine a cancer patient who has to go to the clinic or hospital to have blood drawn for a complete blood count. With this technology, the patient could someday run the test at home and submit the results to a doctor via a smartphone, Hassan said.

Bashir said the world of medicine is moving away from the patient going to the lab and more toward the lab coming to the patient. Or rather, the lab going to a chip.

The next phase involves developing the prototype and continuing to run samples. Their field research will shift to African countries, specifically Kenya and Uganda.

Hassan estimated this second-generation device could be available commercially in about three to four years.