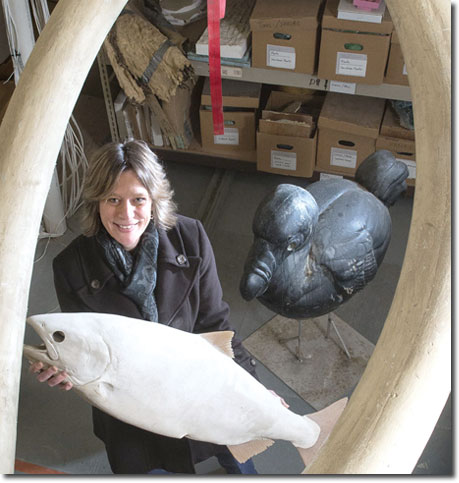 The county's industries include large manufacturing plants such as Plastipak, Solo Cup and Kraft Foods; technology companies such as Wolfram, Amdocs and Volition; and cutting-edge biotechnology and nanotechnology labs, many located in the University of Illinois Research Park, such as Sony Biotechnology, ImmuVen and Sonistic.

The following are profiles of just a few companies in Champaign County that are producing goods for customers locally, nationally and worldwide.

Taylor Studios does design and fabrication work for exhibits for museums, nature and cultural centers, parks and businesses. Its creations include models of figures, plants and animals (such as their full-scale model of a Deinonychus dinosaur for the Orpheum Children's Science Museum in Champaign).

Taylor Studios is now helping design and build three galleries for the North Dakota Historical Society with exhibits on dinosaurs and prehistoric life, local North Dakota history and Native American history. The company is also working with the Wisconsin Department of Natural Resources on a project for Horicon Marsh, a wildlife refuge in Wisconsin.

"We get to work with amazing clients," said Betty Brennan, owner of Taylor Studios. They include the National Park Service, the Field Museum in Chicago, the Pentagon, the National WWI Museum in Kansas City, Mo., the Audubon Nature Institute in New Orleans and the Smithsonian Institution, along with many state parks.

"(Our work) is very engaging in the sense we're teaching people about nature and culture and history and science, or creating beautiful artworks that enhance the visitor experience," Brennan said.

In central Illinois, you can see Taylor Studio's work at the Anita Purves Nature Center in Urbana (one of the company's first clients), Miller Park Zoo in Bloomington and the Lincoln Heritage Museum at Lincoln College, among other places.

"When I got into this business, everything was made by hand," Ragle said. "You had to have good hand/eye coordination and know how to replicate teeth."

The work has changed greatly due to digital technology. Now Ragle looks for employees who are computer-savvy.

Digital technology allows dentists to capture an image of a patient's teeth with an oral scanner, rather than taking a traditional impression. Additionally, designers can now shape teeth digitally, with the click of a mouse, rather than carving a model in wax.

Once a product is designed, employees at Ragle Dental Laboratory use a computer-controlled milling machine to produce it. Or they can print a model on a 3-D printer, then press it into ceramic.

David Hodge, owner and CEO of Litania Sports Group, oversees a company that includes six divisions. Litania Sports Group acquired Porter Athletic in 2006. It focuses on new construction, providing all the necessary equipment and systems to finish a sports facility once it is built.

A reorganization three years ago that provided a separate division geared to specific sports and markets has been successful, and the company has grown significantly in the last few years.

Jerommie Smith and Ryan Bradley formed their own watch company, Smith & Bradley Ltd., in 2012 to sell sport and tactical watches.

Their initial product was the Atlantis, an automatic stainless steel dive watch. It has been dramatically redesigned, Bradley said. The first edition of the watch was assembled in Hong Kong, but the improved Atlantis will be built here in Champaign County.

Last summer, Smith & Bradley introduced the Sans-13, a tactical watch designed for police and military use. The company is currently designing a sport watch that will be American-made. It will be called the Patriot, and it should be available this summer, Bradley said.

Smith does the design work for the watches, and Bradley does the marketing.