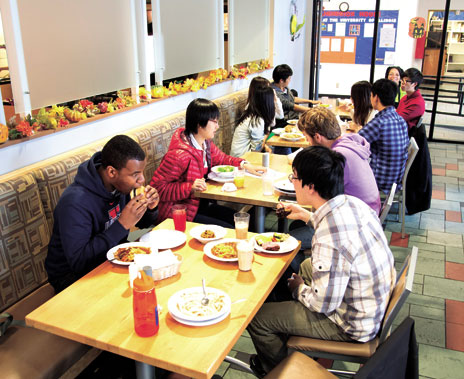 A University of Illinois student needed help recently in finding someone to mend her ripped marching band uniform before the upcoming homecoming festivities. She asked the staff at her dorm, Hendrick House, for a suggestion.

Betsy Hendrick, president and CEO of the private residence hall, overheard the conversation. She took the uniform home and sewed it herself.

That sensitivity to the needs of college students is something Hendrick saw her parents demonstrate while she was growing up. Her parents owned several rooming houses on the UI campus before building Hendrick House in 1965.

"I saw how much my mom and dad cared for the students, and I always tried to do that, even with the large number of students we have now," said Hendrick, who co-owns Hendrick House with her brother and sister.

Hendrick began helping her mother manage the residence hall in 1979, after her father's death. She left a career in journalism and public affairs (most of it serving as press secretary in the Cook County sheriff's office) to run the residence hall full time since 1985, following her mother's death. She has followed her mother's business philosophy: "Charge enough to make a nice living, but not so much as to gouge the students."

Hendrick has always enjoyed being around the students, and she has stayed in touch with many of the residents over the years, even occasionally visiting some now living abroad.

After Hendrick took over the operations of the dorm, she built the west tower of Hendrick House in 1988. The 10-story building is just west of, and connected to, the original six-story dorm.

Hendrick House now has a capacity of 364 if all the residents were living in double rooms, but a number of them choose singles. The majority of residents are studying engineering or computer science -- not surprising, given the dorm's proximity to the engineering campus. About 100 of the residents are international students, 60 of them Chinese. Hendrick House was a sponsor for a Cirque Peking performance at Krannert Center for the Performing Arts this fall because Hendrick knew many of her residents would seeing enjoy the show.

Hendrick said her mother was a savvy enough businesswoman to understand that the most profitable part of the family's business would be food service.

That part of the business has greatly expanded over the years. Hendrick House now provides food service for 32 locations, including fraternity and sorority houses and other private student housing. It started providing food service for 580 residents at Newman Hall this year.

Hendrick House plans to open a commercial kitchen on Killarney Street in Urbana, just off Lincoln Avenue, in order to expand its catering business. It is doing extensive remodeling to the former Jericho Missionary Baptist Church building there.

The business began operating a food truck this past summer that sold food at Urbana's Market at the Square and special events.

Hendrick also did a major remodeling of the dorm's dining hall in 2008. The new 3,100-square-foot space added more seating for dining as well as a student lounge. The dining area was reconfigured from a cafeteria line to various "stations" -- including a breakfast station, soup and salad bar, sandwich and wrap station, pizza bar, grill and a "creation station" for made-to-order dishes.

The dining hall project also made the business more environmentally friendly. For example, the remodeled dining hall does not use trays, cutting down on water usage because there aren't trays that need washing.

The project earned LEED Gold certification for its environmentally friendly aspects. They include a geothermal heating and cooling system for the dining area and a green roof. The business grows its own herbs and produce for use in its kitchen, and it buys meat and produce from local farmers.

The proliferation of apartment buildings on campus and the new UI dorms at Ikenberry Commons have not had much of an impact on Hendrick House -- mostly because of location, Hendrick said. Her residence hall is still a popular choice for engineering students.

Those who live there tend to stay for more than one year, she said, and they often come back to work as advisers. The staff tries to provide social activities for students and "make it as homey as possible," Hendrick said.

The LEED certification was particularly important to Rowe, who said she absorbed the lessons of her grandmother and mother about energy conservation and fiscal responsibility.

"It's important for me, especially as a third generation, to continue that tradition. I really want to make sure we're doing the right things, and making the right decisions," Rowe said.

Just as important, though, is caring for the students who live at Hendrick House.

"You have to be here for more than money, if you are in a people-intensive organization," Rowe said. "(Hendrick) taught me the joy of working with college kids, and the patience.

"We are here to meet the needs of the U of I students."