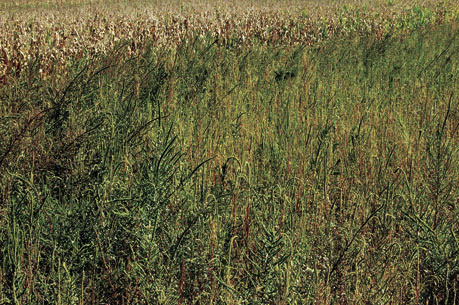 Aaron Hager, a crop sciences professor at the University of Illinois, tells a story about an Arkansas farmer who rented a few of his 8,000 acres for a research plot. The researchers began noticing Palmer amaranth -- a fast-growing weed that is a threat to crops -- in the plot and informed the farmer, who was resistant to making multiple applications of herbicide to so much land. Five years later he was bankrupt, Palmer amaranth having taken over his fields.

Palmer amaranth is native to the southwestern U.S. and northern Mexico. Slowly over decades, it's been migrating northeast.

Palmer amaranth has been in Illinois for many decades, Hager said. But it's a new variety of the invasive weed that has him and other weed experts worried. He said the weed has "really begun to adapt to row crops in the mid-South or Midwest. It's aggressive and it's evolved a resistance to herbicides."

Barry Nash, a weed science technical manager with Growmark, an agricultural supply cooperative based in Bloomington, has watched as this species has moved closer and closer to Central Illinois. It was confirmed in Champaign County last year, he said, and he identified it in Illiopolis earlier this summer.

"It's fascinating how fast this plant is moving. It's unbelievable," Nash said. "It's moving so fast, we figure within two to three years, the entire state will be a red map."

And as it's moved into new areas, it has also adapted to new environments.

"It's a different-looking plant in its native environment. It doesn't grow nearly to the stature (there) that it does in the South and what it will do in the Midwest," Hager said. "It adapts to the environment or landscape it finds itself in and grows to some pretty impressive proportions."

That adaptability comes because it is a very genetically diverse species, Hager said. Each female plant produces hundreds of thousands, if not a million, tiny seeds that are easily transported. And the plant has a high germination rate and will emerge earlier in the spring and later in the season than other weeds. It has devastated crops in the South, and if not controlled, it can completely overtake a soybean field in a matter of weeks.

"The most important thing is how do we get people to be very proactive in being aware that this is a real threat, it's coming and the way we can be most successful in managing it is to never let these seed numbers begin to build," Hager said. "Is it really worth walking across a 40-acre field to cut out three or four surviving Palmers? Most definitely."

Hager and his colleagues are putting a lot of time and effort into educating farmers about the risk and helping them identify the plant, which at its early stages is difficult to distinguish from other species of pigweed. Farmers can send plant samples to the UI to determine whether they are Palmer amaranth. The plants will also be tested for resistance to the commonly used herbicide glyphosate (marketed as Roundup).

Illinois is the only state to offer this service (funded by the Illinois Soybean Association), and scientists tested 50 to 60 samples last year, the first year the service was offered, Hager said.

It's crucial for farmers to identify the plant early and take immediate action to eradicate it, he said. The effectiveness of herbicides against the weed dramatically decreases once the plant reaches 4 inches tall, and with the right growing conditions, it can grow 2 to 3 inches per day, Hager said.

"The time frame for timely (herbicide) applications is very, very narrow," he said.

And farmers are well past that time frame this year. Their only recourse now is to scout their fields, bag any plants with a garbage bag to prevent spreading the seeds, chop the plant out and remove it from the field.

"We've got to plan for the worst," Nash said. "When we take Roundup out of the mix, we really don't have good chemistry to control it.

"We've got to figure out how to manage this and not let this thing go to seed."

Use of residual herbicides is key, he said, to keep the population of Palmer amaranth "down to a controllable level." He also recommended tillage and using cover crops to reduce germination of the weed.

Hager and other scientists have a research plot just west of Kankakee this year, so they can evaluate how Palmer amaranth grows in Illinois soil and the effectiveness of herbicides to control it.

Hager said Palmer amaranth is not yet as prevalent in Champaign County as in other parts of the state, particularly southern Illinois. But farmers should not take any feeling of security from that, he said, noting there are farmers in the central part of the state who had to tear up their fields and replant soybeans this summer because they couldn't get Palmer amaranth under control.

"There is absolutely no way you can pay too much attention to this weed," he said.

"We're not at the point yet we're being overrun as other states have been, which puts us in a good position," he continued. "The best thing we can do is remain vigilant and don't assume we don't have it. If we can keep these populations from building up, we stand a very good chance against it.

"You can farm with Palmer. We won't farm the same way we do now," Hager said. "It's a very expensive species to manage. There is no one product that controls it all growing season. It's a species that, once it becomes established, our conservative estimate is herbicide costs will at least double.

"The ultimate consequence is yield loss potential of 100 percent," Hager warned. "If you don't adequately control this, you will not harvest a crop from this field. People will lose farms and go out of business if they don't take this seriously."