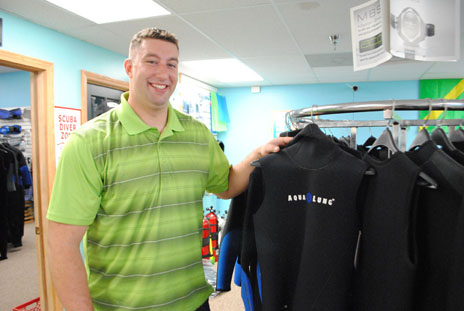 It may surprise some that a scuba diving business thrives right here in the heart of the prairie where the bodies of water consist of low, muddy rivers and ponds that are usually gravel pits left over from road-building. But it is true! Midwest Scuba Center has been around for four generations of owners, each successful in their own right. And the business has not been passed down from family member to family member, either. Each new generation has new owners with that one common bond: the passion for scuba diving.

Midwest Scuba Center's new owner, Alex Gentner, is excited to dive right in and take his business to a new level. He's the epitome of an entrepreneur; risk taker, innovative idea maker, and a mover and a shaker in the world of scuba diving. It's ironic that he didn't grow-up as a diver. He came into it a few years back and is now a PADI- Professional Association of Diving Instructor- who is certified for life.

"It's just really fun and I love it," he said from his shop, which is located at 1717 Philo Road, Urbana at Sunnycrest.

Heck, Gentner graduated just a few years back from Culver-Stockton College in Canton, Mo., where he played forward for the Wildcats basketball program. So, it seems like this young man is a newbie in the ranks of entrepreneur-dom.

"I have been working on "something" my whole life," he said. "I've always had ideas."

Gentner, who grew up in Urbana, has been working at Sunnycrest since he was waist-high. His grandfather, Clive Follmer, had him working in and around the mall, earning his keep. The successful Follmer, who was an established attorney and a UI basketball legend, had a tough-love approach in his lessons for his grandson, Gentner said. Follmer passed away just this past August, 2016, and Gentner hopes to carry on his grandfather's legacy of hard work, support of customers, and making his business a success.

Gentner has also worked for a locksmith and is a certified gunsmith. He is a self-taught auto-mechanic.

He also flips houses as a side hobby. He learned the trade from his father, Gert Gentner, who co-owned the company DNR Home Improvements. The elder Gentner passed away in 2011.

"I'm working right now on a home for a handicapped couple," he said, adding that accessibility is really an important issue.

He works most days of the week. He smiles as he speaks of it, with great enthusiasm in his voice.

"If you find something you love, just do it. It doesn't feel like work," he said.

During his interview, one of his scuba students came in to the shop. Kaiqi Zhou is a UI graduate student in civil engineering and is taking lessons from Gentner.

"I just started. I like it so much," Zhou said, smiling and shaking hands as he approached Gentner.

Gentner said that it's possible to be a certified diver in as little as two days by starting out with the first three sessions online and then proceeding to the physical instruction.

"We offer lessons at the ARC (UI Activities and Recreation Center) and at Stephens YMCA. We also offer trips, like the one to West Palm Beach in January. Then, there are local to Kickapoo State Park and Haigh Quarry in Kankakee. It's an intense process, but very rewarding," he said while he moved around air tanks in the shop.

Between servicing the scuba divers that, believe or not, are in great numbers in Central Illinois, according to Gentner, and giving lessons to new scuba divers, he has great plans to expand the clientele. Gentner said that most people that can swim, can scuba dive. They are many levels to the sport, and many accommodations according to skill level.

"It's safe and rewarding. You can't rent or buy this equipment without certification," Gentner said about the sport of scuba diving, which has among other technological advancements, blue tooth wireless transmitters on the air tanks that measures breathing rates and oxygen availability.